A unique Christian monastery, founded by a Byzantine Emperor and surviving for fourteen centuries in a Muslim region was the fascinating subject of Dr Helen Rufus-Ward’s talk to the EAC. St Catherine’s Monastery is located under Mount Sinai, in the Sinai Peninsula, Egypt. Founded by the Emperor Justinian I in the sixth century AD, on the site of the Burning Bush and Mount Sinai where Moses received the ten commandments (Exodus 3, verses 1-22 & Exodus 20, verses 1-21). One of the oldest Christian monasteries in the world, inhabited by Greek Orthodox monks, and including a mosque, recognising its sacred status to the Christian, Judaism, and Islamic faiths. Held in the monastery is a copy of the ‘Achtiname of Muhammad’ in which the Prophet bestowed his protection on the establishment. Also at the monastery are the remains of Saint Catherine of Alexandra, after whom it is named, and who was martyred by the Emperor Maxentius. The monastery has long been the site of pilgrimage, until the 18th century only assessable via a winch arrangement, where pilgrims were hoisted over the wall. Dr Rufus-Ward showed two works by the British artist David Roberts, who undertook a painting excursion to the region in 1839 and another of the Burning Bush by John Frederick Lewis from 1843.

In its long history the monastery has been subject to attack, neglect, and isolation, but has somehow survived. In 1844 the Codex Sinaiticus, an original manuscript of the Bible, was taken from the monastery under dubious circumstances by Konstantin Tischendorf and held in Leipzig, Germany, a further portion being taken in 1859 to Russia and then sold to the British Museum where it remains, having been digitised and made available on-line. The monastery however still houses many treasures, including the Syriac Sinaiticus, a Gospel palimpsest manuscript and over 2,000 icons of various religious figures.

This was a fascinating talk by Dr Rufus-Ward, who finished by explaining that a report of a garrison being established by Justinian at Saint Catherine’s to protect the monastery had been proved as fact by DNA evidence from the current inhabitants of the region.

Review of  “The Moon in Art and Science”

There is some evidence that from as long ago as 15,000 BC, cave paintings from Lascaux in France featured lunar phases. The famous Nebra Sky Disk, discovered illegally in 1999 in Germany and possibly from 1,600 BC, is the oldest sky map known, showing the Moon in different phases and clearly depicting the Palaides star formation.

Dr Loske gave many examples of paintings across different genres featuring the Moon, from Jan van Eyck’s ‘The Crucifixion’ – one of the first to show surface features with some accuracy – to Peter Paul Rubens’ ‘Flight into Egypt’ and Samuel Palmer’s ‘Harvest Moon’. It has often been possible to determine the exact date of a painting from the sky’s features. There have also, of course, been many films with a Moon theme, one of the most intriguing, but now a largely ignored early production, being Fritz Lang’s ‘Frau im Mond’, a very early science fiction film from 1929. (As Dr Loske indicated, much of this film is available on YouTube and I do urge you to have a look at this.)

The presentation illustrated how the Moon has had such a great influence on humanity: scientifically, culturally and spiritually. Dr Loske ended with a short question and answer session and was enthusiastically thanked by the EAC members for a most stimulating talk. 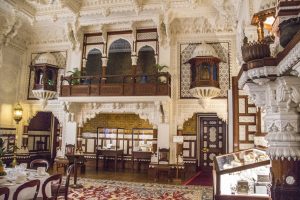 The lecture was in two parts. The first dealt with the Colonial and Indian Exhibition of 1886 where the Indian Palaces took pride of place: the jewel in the crown in terms of the British Empire. Queen Victoria loved this exhibition visiting several times, in particular the section which showed the work of Indian craftsmen – silk weaving, wood carving and even snake charming!

The Queen commissioned the artist Rudolf Swoboda to paint portraits of these artisan workers. He was sent to India to continue this commission which included princes and army officers as well as some women of note.  These portraits, many quite small and done in a single sitting, can now be viewed at Osborne House on the Isle of Wight where they fill the corridors leading to the main dining rooms recreated in the style of the Durbar Hall from the 1886 Exhibition.

The second part dealt with the story behind the Durbar Hall. The whole of this exhibit was purchased by Lord and Lady Brassey to house their vast collection of artefacts collected from around the world. Initially built as an extension to their house in Park Lane, London it was later bequeathed to the town of Hastings (1918). The Durbar Hall weathered many challenges over the following decades, from its re-housing, to changing public perceptions.  Innovative re-programming, later bolstered by better access facilities enhanced its scope as a venue and showcase.  This wonderful Hall with its intricate carved panels, its lattice work, decorative staircase and cabinets of craft work from the exhibition, can be experienced first-hand at Hastings Museum and Art Gallery.

Both lectures provided a fascinating amount of detail and were well received by the audience.