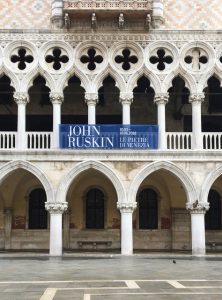 LECTURE IN THE TOWNER CINEMA

John Ruskin and The Stones of Venice.

John Ruskin dominates the British 19th Century art scene as both an artist and even more importantly as art critic. This was the context for Sarah Quill’s fascinating lecture on this polymath, and focussing on his seminal work, “The Stones of Venice”, published in three volumes between 1851 and 1853. John James Ruskin was born of wealthy parents in February 1819 and lived until 1900. Over his career he wrote on a wide range of subjects, such as geology, architecture, literature and politics, but it is as an art critic that he is principally remembered. And of all his works it is probably “The Stones of Venice” for which he is best remembered. This was a labour of love, with Ruskin desperately attempting to record and if possible, save, the glories of a place that he felt was succumbing to the ravages of industrialisation, war and neglect. He was much influenced by the great British artist, Turner, whose depictions of Venice first set him on this self-imposed mission. In 1849, Ruskin, his wife Effie and their servant John Hobbs, arrived in Venice to start work on his book. These were turbulent times, with the Venetians rising against their Austrian overlords. The city was suffering: a railway link had been built across the lagoon, linking to the mainland, some buildings had been taken over for industrial use, with the resultant pollution, and others had been wholly or partially demolished and replaced with structures unsympathetic to the traditional architecture. So, Ruskin saw his mission as one of recording what was being lost and in trying to prevent any further destruction. One of his principal focuses was the Doge’s Palace, which he felt was in imminent danger of collapse. He both recorded by drawing and arranged for plaster casts to be made of particularly detailed and vulnerable items such as cornices to be taken and preserved for prosperity. In so doing, he allowed for many of the artifacts to be remade and to replace the decayed originals. He was also an early adopter of the Daguerreotype method of recording – an early form of photography, and many of his drawings were based on these images. He collaborated with the artist Thomas Shotter Boys in producing coloured lithographs of Venice buildings. Many of the highly detailed notebooks he produced are held by Lancaster University and are an important research source.

Other substantial works by Ruskin included “Modern Painters”, where he defended the works of J.M.W. Turner and championed the Pre-Raphaelite painters, such as Millais, Holman Hunt and Rossetti. He wrote “The Seven Lamps of Architecture” which provided a guide to good practice in building design. He established the Ruskin School of Drawing in Oxford, where he held a professorship. He was even an early evangelist for the effects of humanity on the climate and predicted some of the effects we see today.

It is true to say that Ruskin was an obsessive, with so many interests and activities that eventually his health, and particularly his mental health, suffered. But his legacy lives on, much of the protection of ancient works and buildings in place today is a direct result of Ruskin, and today’s National Trust can be regarded in part as a result of his work.

We were treated to a fascinating overview of George IV’s world by Alexandra Loske, Curator at the Royal Pavilion, Brighton. She described how this monarch came to define the late 18th and early 19th centuries as an age of ostentation, culture and outrageous extravagance, at least in Royal circles. George was born in 1762 and immediately inherited the title of Prince of Wales, becoming Prince Regent in in 1822, before assuming the throne on the death of his father George III in 1820, until his own death in 1830. Originally a good looking, if rather effeminate figure, excessive living took its toll, and, as the many caricatures show, suffered from ill health and was grossly overweight. Personally frustrated in his relationships, he illegally married his great love Maria Fitzherbert, but was forced into an extremely unhappy marriage to Princess Caroline of Brunswick; 1st cousins who had not previously met and who shared an immediate and mutual dislike. The only child from the union, Princess Charlotte, sadly died later in childbirth, which effectively ended any possibility of providing a direct descendant for the throne. Eventually it was a distant relation, Victoria, who became Queen.

George lived life to the full in every sense; had many mistresses and indulged his passions in ornate gold objects, exquisite porcelain, fine paintings, music, and dance, running up huge debts in the process. Initially housing his treasures at Carlton House in London, he commissioned a new pleasure palace in the form of the Brighton Royal Pavilion, a controversial building influenced by Moorish and Indian architecture. Concluding her talk, Alexandra described the recent exhibitions at the Royal Pavilion, including many works loaned from Buckingham Palace and other royal residences, and displayed in their original setting.